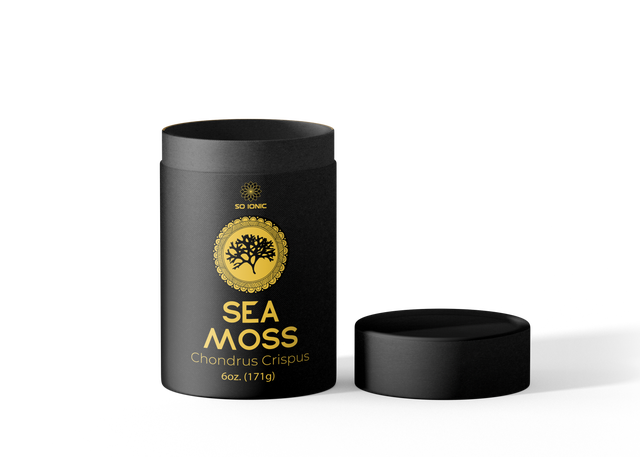 Golden Chondrus Crispus also known as Irish moss is a sea vegetable that grows in the intertidal zone on both sides of the North Atlantic. It is short and bushy, and often found in thick carpets on rocky shores. Our coarse flakes are harvested in the North Atlantic. Irish Moss can express itself in a variety of colors despite its classification as a red seaweed.

Golden flakes yields an amazing gel. Unlike the other sea mosses this sea moss does very well when yielding its gel through boiling. A little goes along way! The flakes increase surface area, allowing the nutrients of the moss to effortlessly permeate into the hot water.

Irish Moss was once the primary source of Carrageenan (also called carrageen). Carrageenan is a vegetarian alternative to gelatin; and it’s widely used as a colloidal thickening agent in many foods and cosmetics. Irish Moss powder can be used in the home kitchen to thicken puddings, custards or soups. The rise of craft brewing has also brought back the historic use of Irish Moss as a beer clarifier, as it naturally accelerates protein coagulation; essentially eliminating the need for post-boil filtration.

Irish Moss and carrageenan have a long history of medicinal use for respiratory and digestive ailments. Like other seaweed-derived gels, carrageenan is soothing and nourishing to the skin, making it a valued ingredient for homemade beauty and skin care products. Like most sea vegetables, Irish Moss is rich in minerals, vitamins, fiber, and bioactive compounds. Just Rinse 2oz of sea moss in cold water. After rinsing place in bowl and allow distilled water to cover sea moss by 2 inches. Soak in distilled water for 30 minutes. Drain the water add to pot with 1/2 gallon distilled water. Bring to boil and strain. Allow to cool and gel. You will yield a half gallon of gel. Refrigerate and use as needed.